The Milwaukee Chapter of the Barbershop Harmony Society strives to provide a weekly opportunity for its members to experience the joy of ringing barbershop chords in fellowship with their friends, and frequent opportunities to share that joy with others through performance. The chorus meets at 7:30 pm most Tuesdays, click here for more information. 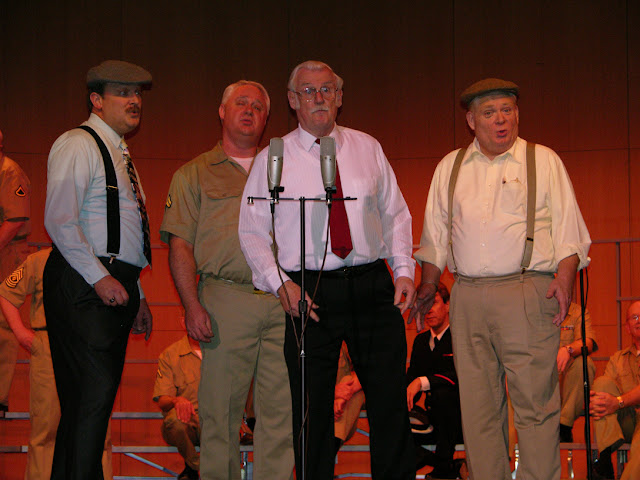 I first met Don after the merger of the old Greendale Village Showmen  and the Milwaukee Barbershop chorus.  It didn’t take long to see how talented he was musically.  He understood all of the chord structures and how the various parts should sing their notes depending upon what part of the chord they were.

When Don and I sang together in Premium Blend, along with Don Doss on bass and Dave Paschke on lead, he would often stop us in mid-song to fix a chord, using language like “the root of the minor 7th chord”.  None of us at the time understood what he meant.  After he had done this numerous times, one of us would say “Are you sure you don’t mean the 4th of the 12th chord?”.  We’d laugh, he’d grin and then dumb it down for us.  He was also a choir director and could tweak a chord to make it sound better, which he did in some of the songs in the quartet’s repertoire.

Don also filled in as Director of Inspiration when Bob Greiner was not available.  At my Dad’s funeral service, Don was directing and singing baritone, which didn’t work because the audience couldn’t hear him since he was facing away from them.  After a few minutes, my wife nudged me and said “Go back there and sing.  You know you want to.” So I did.

My best memory of Don was when he was featured on the song “Old Bones” during Premium Blend’s song set on the 2005 annual show.  In this song, the baritone has the melody.  He did a wonderful job. Not only did Don look the part, he performed the song well, and the audience loved it.

Don served as Treasurer of the Milwaukee Chapter for many years.  He was an accountant, so it was a natural fit.  Since accounting software was not generally available at the time, he used Excel to create his own. This involved linking spreadsheets together to summarize information for the monthly report to the Chapter Board, balancing the checkbook, and filling in line-by-line totals for the chapter’s income tax form.

It was a sad day for him and for us when he was no longer able to be an active singer.  However, as his Alzheimer’s progressed, his memory of songs still remained and he was able to harmonize, albeit softly to many of the old songs.

We also shared a birthday, about 20 years apart. It was my pleasure to know him and sing with him, and I’ll miss him.